Another new challenge over at Bitten by the Bug 2 is to use some sort of material that would otherwise be thrown out in a project or use a recycle theme.  I am hosting for this challenge.

I hate waste and while I recycle, I also love to reuse what would be thrown away to make new useful items.  I recently started a new job after the company I was with for 34 years closed.  It has been an adjustment and I thought that some pretty new things for my desk would be a great pick-me-up.

I started with a Triscuit box and a Jiffy Corn Bread mix box and came up with this great place for my sticky notes, scrap paper, and paper clips.

I was originally going to use an svg file for desk accessories and cut them from cereal boxes, but I discovered there really aren’t a lot of those files, or at least ones I liked, so I decided to just look for boxes about the size I wanted and use my Cricut to cut out some decorations. The Jiffy box was just right for the Post-It Notes.  Opening the ends of the boxes allowed me to cut the boxes to the height I wanted on my paper cutter.

This was after cutting the Jiffy box, but before cutting the Triscuit box to the right size.  I then taped the bottoms back.

After finally deciding that flowers and bees would be a nice theme, and something different than flowers and butterflies, I found this perfect honeycomb pattern as part of Teresa Collins Basics and this cute bee from Small Talk Frames & Tags.  I made the honeycomb image the width of the Jiffy boxes glued together.  I then used a rectangle the same width and the height of the cut boxes to slice out what I needed of the square honeycomb shape.  I then made a frame out of two rectangles sliced out and welded it to the sliced honeycomb.  I repeated for the size I needed for the sides of the smaller box.  The bees were made from a gold velum and black vinyl.  The velum really shows up so much better in person and I was able to bend up the wings for some dimension.  Wrapping the boxes in a lighter gold before gluing on the honeycomb cut out was easy.  I used a pattern paper from an Echo Park collection called Spring Market to wrap the larger Triscuit box and then glued the the Jiffy boxes to the front.  I did have to put a separate sheet of people on the back of the box since a 12 x 12 wouldn’t go all the way around.

Classic use of tin cans as pencil holders the followed using a soup can and a chicken breast meat can wrapped in the same paper.  I added another bee to the taller can, to tie them together.  The tag on the shorter can covers up the fact that 12 inch paper didn’t go clear around the can.

I finished off with a tissue cover using another pattern from the collection.  SVG Cuts has this on their website and I have used it several times.  While this last piece didn’t technically reuse anything, I did use up some of my vast collection of paper, so that counts, right?

Have fun and put your own recycled or up-cycled project in the links at Bitten by the Bug 2 by August 1. – Denise

For the next two weeks Bitten by the Bug 2 is collaborating with Double Trouble to do a challenge called Oh Baby.  This mood board is our inspiration.

I decided to do an older, but classic technique called a waterfall card. The blocks on the image were my inspiration.

The real fun comes with the action when you pull the tab.

Sorry the video is sideways, but I was having trouble uploading it, so this is the best I could do.

In the past I had just done the mechanism portion by hand, but decided it would be a good idea to have it as a project on Design Space so that I could make them quickly if needed in the future.  Using basic shapes and score lines, it was pretty quick to do.  The blocks that flip were made using a square frame from the Going Places.  I made the frame and also a duplicate with the center contour taken out to make the back of the block from the patterned paper.  Kate’s ABC’s were used for the letters and I attached each of them in the middle of the frame.  Originally I did that to save paper, but was then later able to use the negative cut in a bonus card. The patterned paper was from a really old stack I had by DCWV called Baby Girl.  The size of the stack is 4 1/2 x 6 1/2 which makes it great for cards.  The button brads were attached to the background paper before the whole thing was glued to the card base.

Here is the bonus card using the negative cuts. 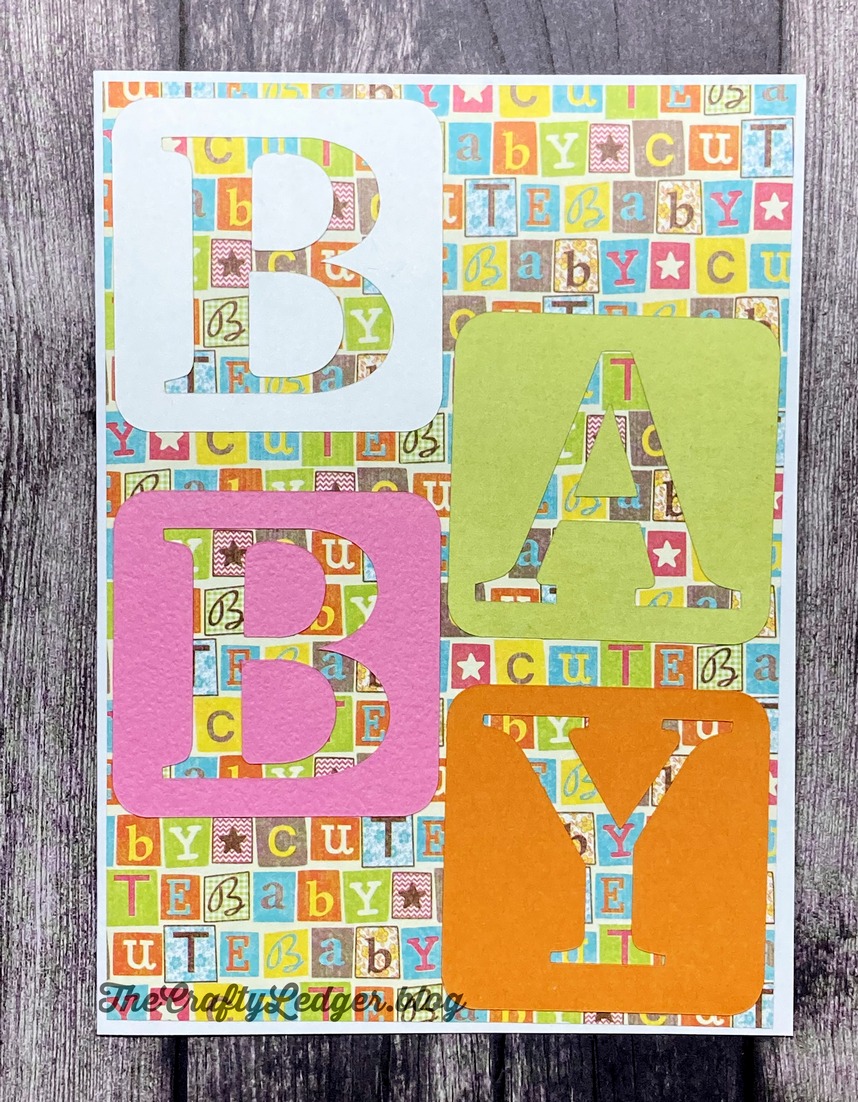 Be sure to visit Bitten by the Bug 2 to add your own project for this challenge.  Since we are collaborating with Double Trouble, we are not requiring you use the Cricut, but you do have to use a die cut in your project.  Have fun – Denise

Come join me as I loosen up my lineal accountant mind and explore my crafty side. 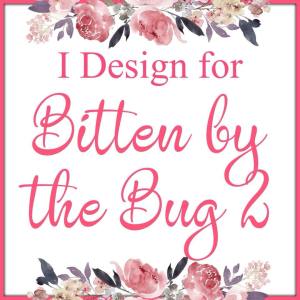