As we start October, Bitten by the Bug 2 has a new challenge called Witches and Ghouls.  I will admit that I just don’t get that into Halloween, but decided to try and make my own shadow box card. 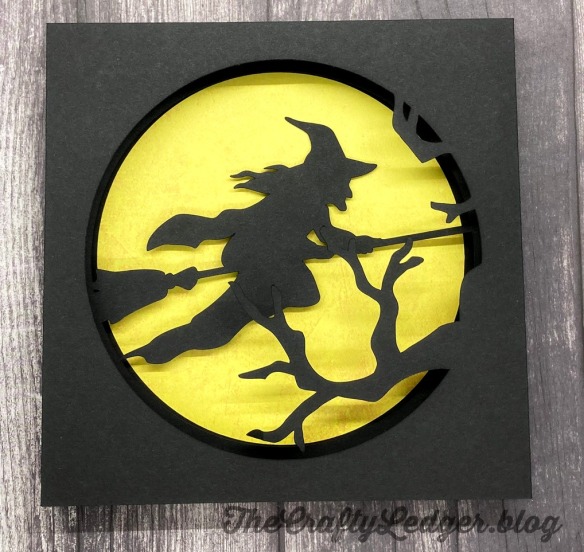 I have made a few box cards before, but this is a little more difficult because the inside tabs run the whole length of the box.  It took two tries to get the card so that it would fold flat, and isn’t perfect, but the depth effect looks good in person.  I started with basic shapes and sliced a circle into the middle of each layer.  On the front I welded a portion of the Spooky Tree from Monster Bash to the side of the circle opening. The witch is is from Autumn Celebrations and I tilted her slightly so that the end of the brooms and the very tail of her robe would overlap the circle slightly so that I could weld it the opening of the circle.  The background paper is from The Paper Studio and putting it over a circle cut in the back lets the light shine through when held up.  My original plan was to use gold velum, but I found out that I didn’t have any left, pretty hard to imagine given the size of my stash, lol.

Head on over to Bitten by the Bug 2 to link up your own Cricut project with Witches or Ghouls and get some great inspiration from the other designers. – Denise

Leave a Reply to Denise at thecraftyledger.blog Cancel reply