I have joined the design team for Bitten by the Bug 2 found here.  Projects are made using our Cricut machines and I  am super excited.  There will be a new challenge every two weeks.  You can add your link for each challenge on their post.  The challenge for January 6 is called Tick Tock and the you must use a clock or part of a clock in the project. 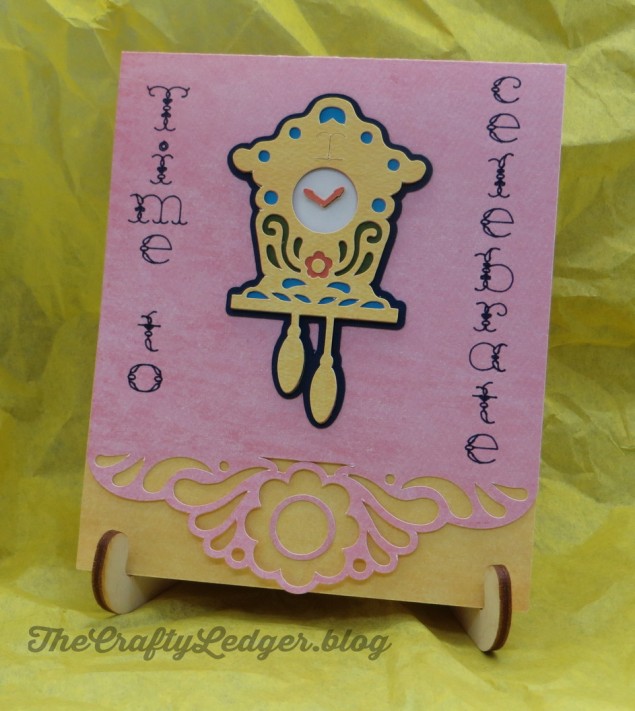 The cartridge called Folk Art Festival has a cute cuckoo clock in it, so I started there.  This cartridge also has a lot of border cuts in it, so I chose one that fit with the design of the clock. and kept only one of the three layers.  I flipped it horizontally and sized it to be 4.25″ wide.  That made the height 1.2″ high. Using basic shapes, I made a card base 4.25″ x 9.8″ (11 minus 1.2)   I placed a border design from the cartridge to the bottom of the rectangle and welded the two together. I did add a score line 5.5″ down from the top, but you could also do that manually.  Placing the cuckoo clock on Design Space showed that a vertical sentiment would fit better, so that is what I did.  This same cartridge also has a font including a writing font.  (Some of the older cartridges had tons of things on them). I wrote the sentiment and then separated the letters arranging them vertically.  Design Space is also great in that you can center things like the letters and distribute them evenly. Cutting that on double sided paper by Carta Bella allows the design to show up.  I used a Cricut fine point pen to write the sentiment in dark blue. The cuckoo clock has five layers plus a base.  Putting all those layers together made the clock thick like a chipboard element and really adds dimension to the card. It allowed me to use a cartridge that I don’t normally use and it was fun. – Denise