Today starts a new challenge on Bitten by the Bug 2 that focuses on food.  I used it as a chance to use a new technique called an Iris Shutter Card. 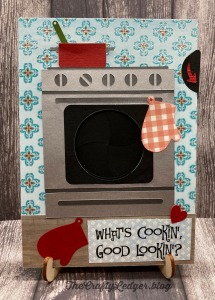 This card starts with a closed center. 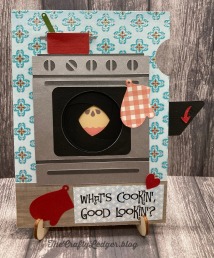 Then a lever on the side opens the center.

Just like a camera shutter to reveal a surprise inside.

I had been wanting to try this technique ever since seeing it on some card sites, but all of them used a physical die for the various parts used.  Not only are the dies expensive, but I don’t like getting a physical die when I have my Cricut to use.  Then I discovered the Lori Whitlock site and they had a lot of these cards as svg files.  This one is the 5 x 7 Iris Shutter Card Oven and can be found here. It was pretty easy to put together following her video.  I changed the front up a little and now that I have the basic elements, I can make more with different fronts.  The patterned cardstock was from a DCWV stack called Nana’s Kitchen.  I did flatten the center image so that it was a print and cut, but you could easily swap out for a sentiment too.  The front sentiment is from a Club Scrap set called 50’s Kitchen.

So find your own fun food themed project to make on your Cricut and link it up over at Bitten by the Bug 2 by February 28th.  Get some inspiration with the other designers there and have fun – Denise.