Well I can’t believe it is the last day of my week.  I truly have loved this opportunity that Unity gave me to showcase their stamps.  I have also loved reading all of the comments and appreciate those who take the time to leave their thoughts.  Remember that on Sunday evening I will randomly draw two winners from all of the comments left this week.  The winners will receive a grab bag of 25 stamps graciously donated by Unity Stamp Company.  In addition I will draw a third winner of 3 new Distress Oxide Inks that I have doubles of.

For my last day I decided to try and use some of the freebies that Unity has sent me.  For those of you who don’t know, they send some gifts each month with the Kit of the Month (KOM) and the SMAK kits.  There are also sometimes a surprise with a regular order.  Below is a picture of these gifts that I hadn’t had a chance to put away yet, but had just kind of let accumulate. As you can see there is quite a variety here. 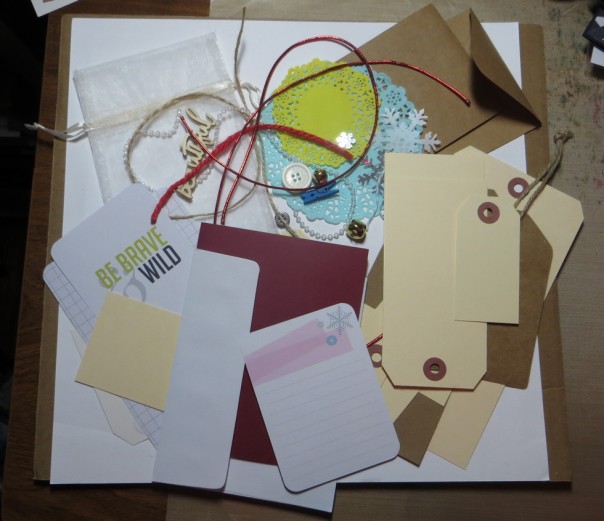 Because I was filling a spot that opened up, I only had a couple of weeks to get ready for GIU week so I didn’t get to make as many things as I was hoping to, but you can get the idea of some of what can be done with these fun extras. 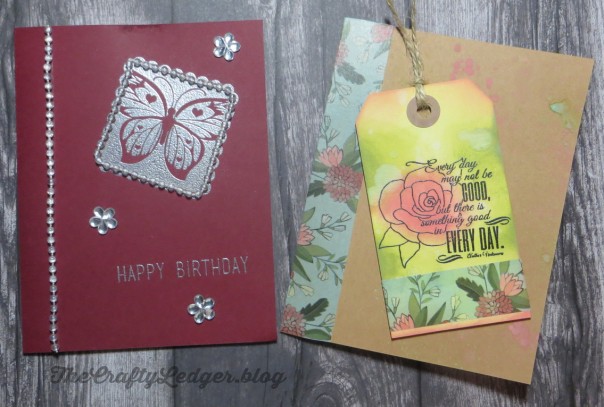 First up were a couple of card bases from the stash.  On the red card I stamped the butterfly and sentiment from February 2017 KOM called Unexpected Places in Versamark and put White Pearl embossing powder on it.  When I heat embossed it, it turned out more silver than white.  I assume that is because some of the red was showing through.  Also from the Unity stash I took the string of clear beads and put them around the butterfly and down the side.  I used a thin double sided tape called Scrappy Tape that held it pretty well.  I added some crystal flowers that I had and seemed to go with the string of beads.   On the kraft base I added a tag received from Unity (I received a lot of tags from Unity).  I heat embossed the sentiment from the Lasting Thoughts set and then used Distress Oxide inks on them.  I also used a brush to splatter on the kraft card base.  Some washi tape that I had on the side and bottom of the tag and it was done. 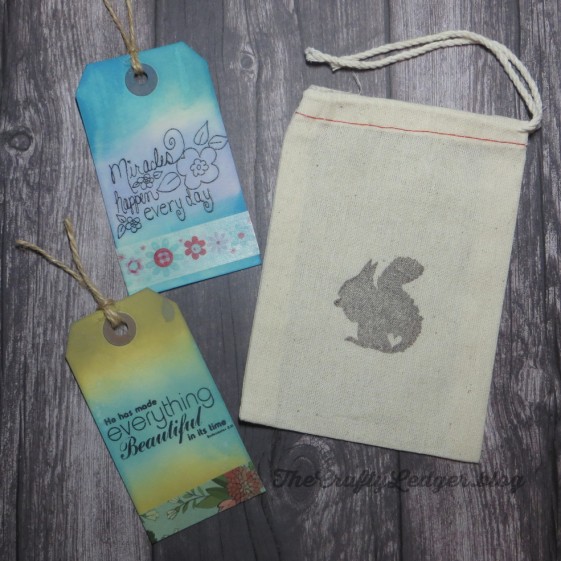 I used two more tags and a cute cloth bag for these.  The tags used sentiments from Lasting Thoughts and Something within that were heat embossed and then distressed with Distress Oxide inks.  Some washi tape finished them.  The squirrel is from September 2017 KOM called Flowers, Foliage, and Fall.  I stamped it with brown Stazon ink and will probably fill it with nuts and put in a Christmas stocking. 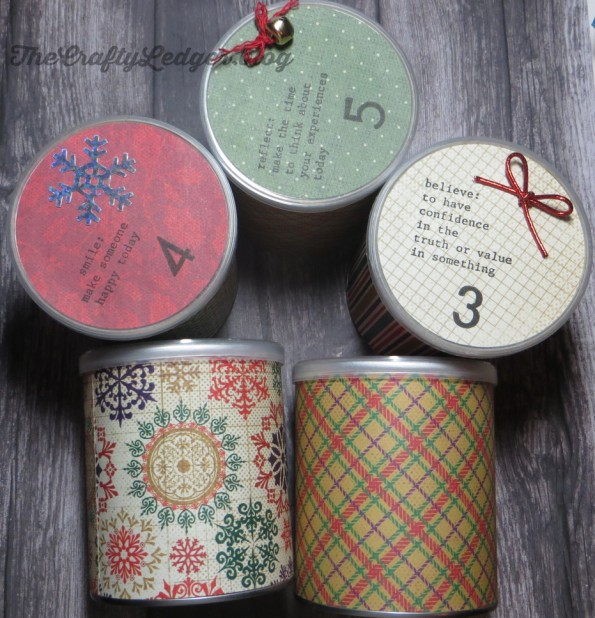 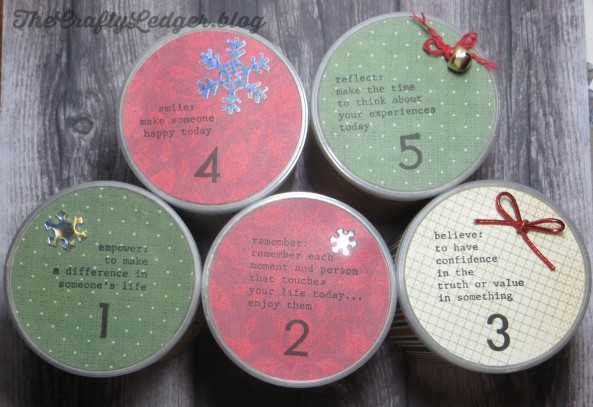 I impulsively purchased a pack of 36 small cans of Pringles while I was at Costco.  The first time I opened a can, I thought I should be able to do some with this (in true crafter fashion) so I started to save them.  I searched Pinterest and there was this cool idea to make an Advent tree using these little cans.  I thought that could work and there would be plenty of room to put something in each day for a family to share.  I cut circles on my Cricut Explore to fit the lid from a Christmas paper stack by DCWV.  The stamps I used are from a Donna Downey set called Advent.  This is a huge set that comes in two packages.  It includes these wonderful ideas and thoughts for each day of Advent.   It also includes large numbers 0-9.  The numbers were too large for my tops, so I ended up using another number set that I had.  I was able to use the Unity gift stash for the embellishments.  There were cute snowflakes, bells, red cording, etc.  I was only able to make five before I needed to stop and actually take pictures to make this post.  When I get the rest done and put together in either a tree or wreath shape I will try and post it.

Thanks for looking and make sure to leave a comment. – Denise