Remember to comment to have a chance to win one of two Unity grab bags that have 25 stamps each.  Also follow my blog for a chance to win a couple of my extra Unity stamps.

Unity has four different memberships that you can join if you want to get some great new stamps automatically every month.  I joined the Kit of the Month (KOM) last year and really look forward to that package arriving just after the first of the month.  For today I challenged myself to use all of the stamps from a kit that I hadn’t had a chance to use at all.  All the projects today were made using the March 2017 KOM called Pretty Darn Amazing. 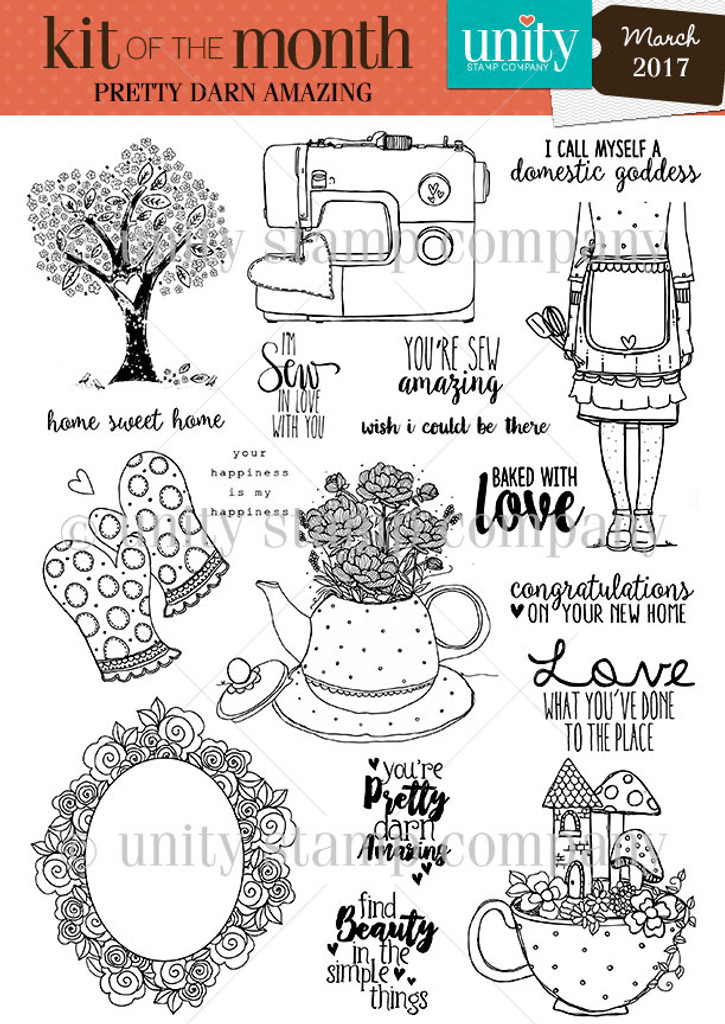 See how many images and sentiments there are.

The idea for this card came from one I saw on the Facebook group Unity {show & tell} that had smoke inked across the top since this figure doesn’t have a top.  I liked that idea and took it just a little further by pulling a cotton ball out and then spraying it with Distress Spray in, appropriately enough, Black Soot.  I colored the image with my Spectrum Noir markers and went around the edge of the card with the blue marker. The patterned paper is from Basic Grey called PB&J.

A close up of the “smoke”

I have done more fussy cutting since I started using Unity stamps than I care to remember.  Some people love fussy cutting, but I am more neutral about actually doing it.  I decided to use my Cricut Explore to do the cutting for me.  There is a great tutorial on the Cricut website (found here ) and also Crafts by Two (found here ) on how to make a cut file for a stamped image.  After playing a little with the size and cutting it out on white cardstock on the Explore, I stamped the image  for this frame using my Stamp-a-ma-jig to line it up on the cut out.  It worked out really well, since I would not have taken the time to do this fine of a fussy cut.  I used Spectrum Noir markers to color it and put a piece of shiny foil cardstock behind the frame to look like a mirror.  You can actually see yourself in it.

I experimented with alcohol inks on a 6 x 6 tumbled tile from a clearance pack I picked up at Lowe’s.  After it dried I stamped it with Staz-on ink and put cork on the back to use as a hot pad.

These tags were made by experimenting with Distress Oxide Ink and putting washi tape at the bottom. I will attach them to homemade goodies at Christmas time.

This card features a paper piecing technique for the heart on the sewing machine.  The paper s from a pack by Carta Bella called Sew Lovely.  It’s like it was made for this stamp kit.

The next two cards use paper from a 6 x 6 pad called Sweater Weather by DCWV. The coloring was done by Spectrum Noir markers. I used some Nesting dies to cut out the mats.

The paper on the inside is part of the paper pad, but looks a lot like it could be a Unity stamp, especially with the heart.

I will admit that there were two sentiments in the kit that I didn’t use, but I did come close to my goal.  – Denise